The exhibition in one sentence:  An exhibiton about cultures, the contact of different cultures throughout time and the problems and benefits thereof. 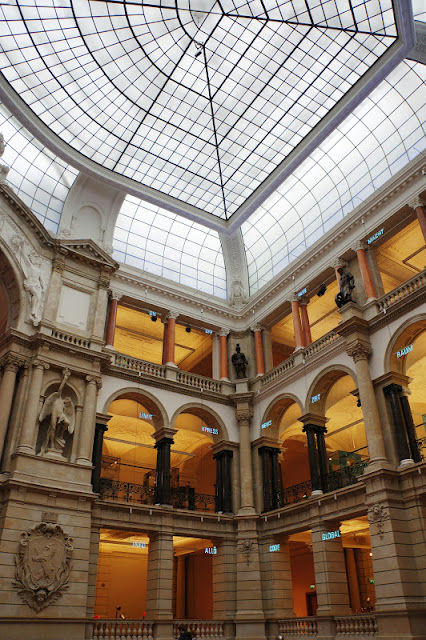 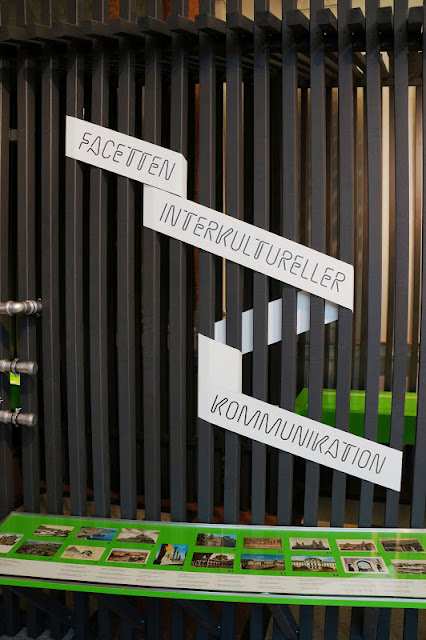 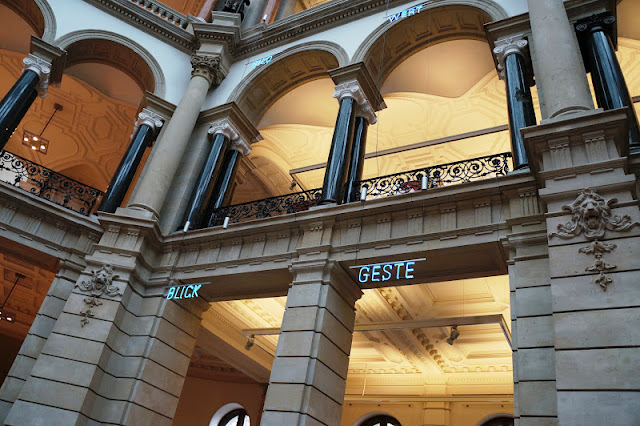 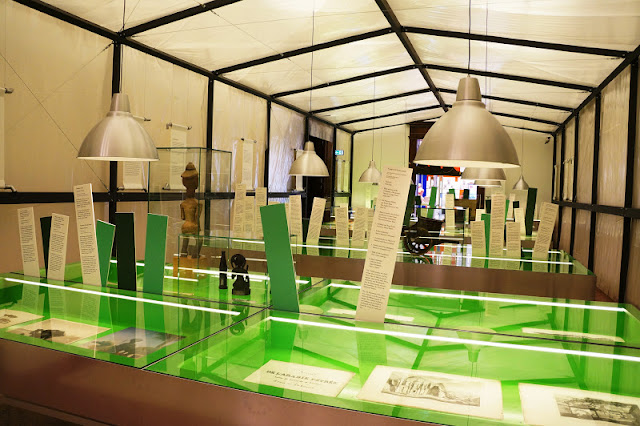 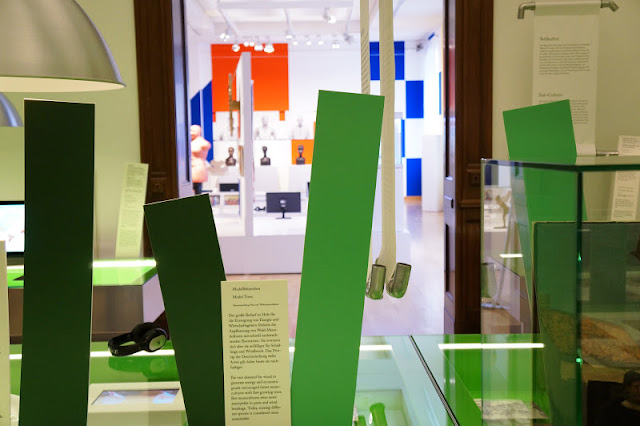 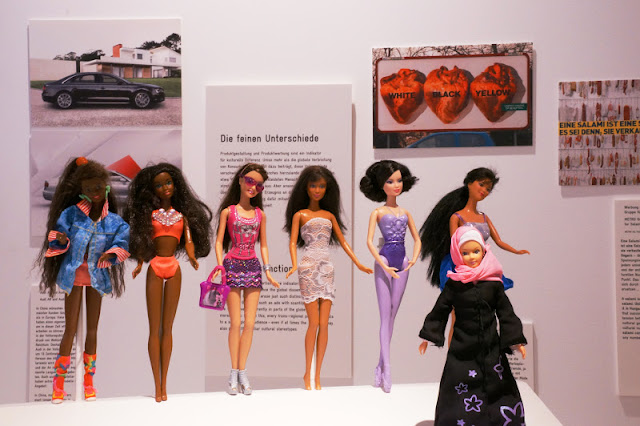 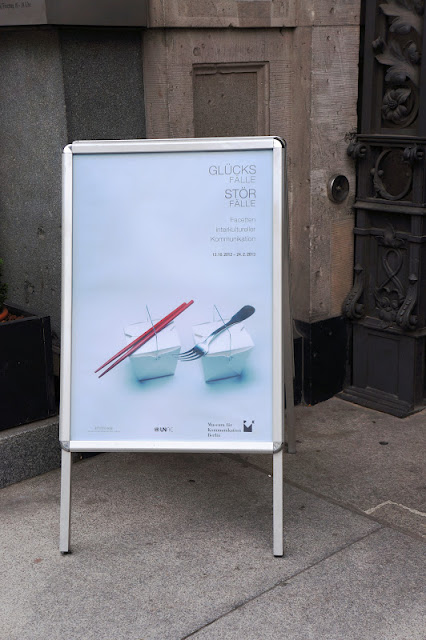 I liked: The fact that several important anthropologists were mentioned. In very short texts, it was explained what they stand for and what their theoretical approach to culture was.

I disliked: The fact that the exhibiton was quite fratcured. So many details, so little rigor.

What about the exhibition design? First room feels like a jungle, second room is mostly white, but there clearly is a design, which I always prefer over a white room when dealing with topic exhibition.

Fun fact: I guess it's not part of the temporary exhibiton, but approaching it, you can walk on a certain path where your walking-pace is measured. Then, on a world-map, you can check whether you walk as fast as which nationality. Apparently, I walk as fast (or rather as slow) as a Brazilian.

Parental advisory: There is definitely things that kids can enjoy, such as the Barbies from all parts of the world, but there is a lot of text to be read if you fully want to understand the concept.

Overall rate: An OK exhibition, the problem is, that the curators tried to put too much information into it. Less would have been more.

Link to the exhibtion page

The exhibition in one sentence: An exhibition on one thousand years of cultural contacts between Russians and Germans. 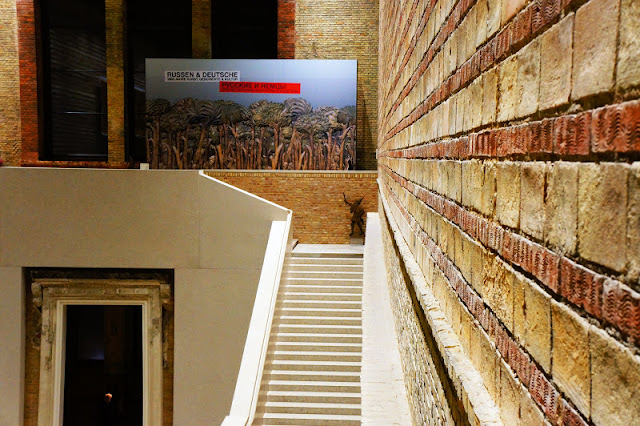 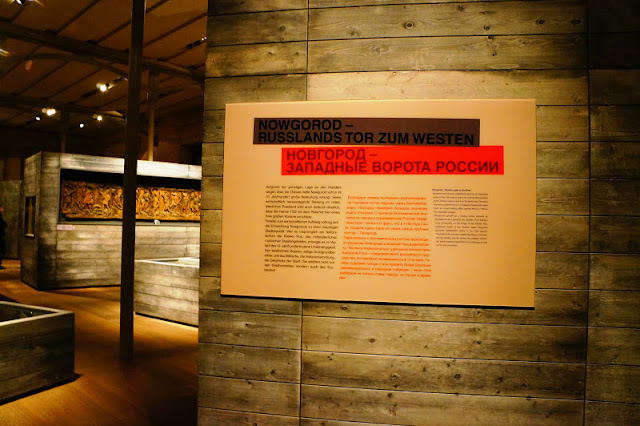 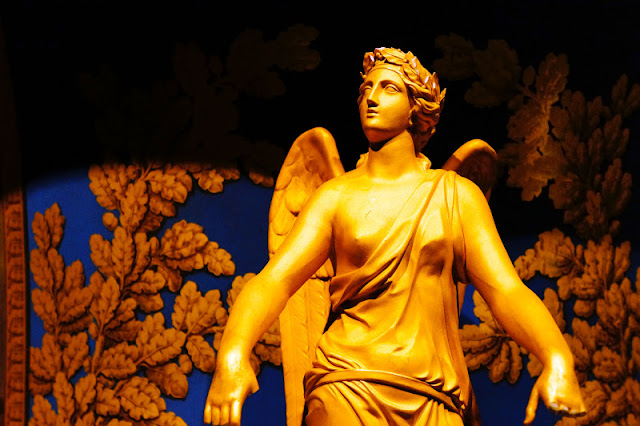 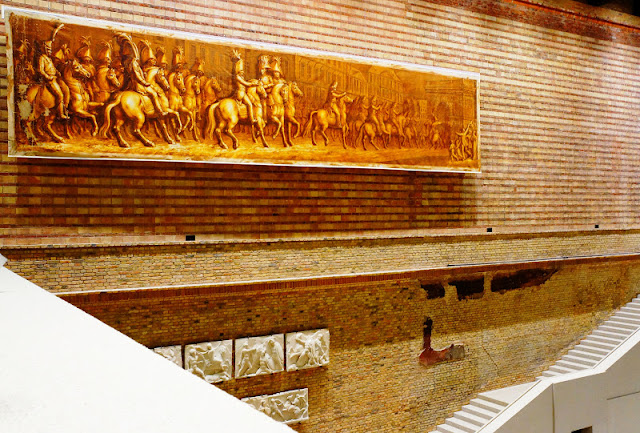 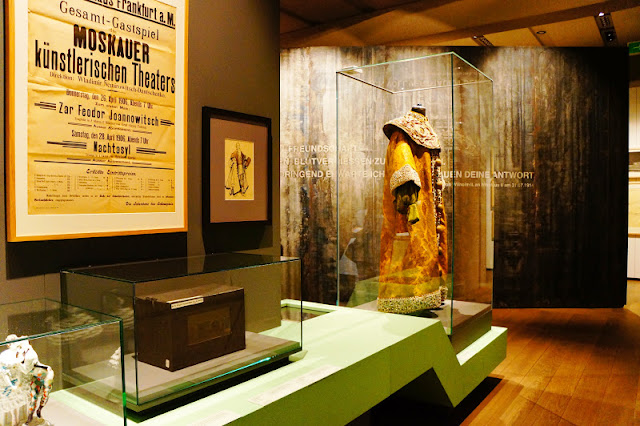 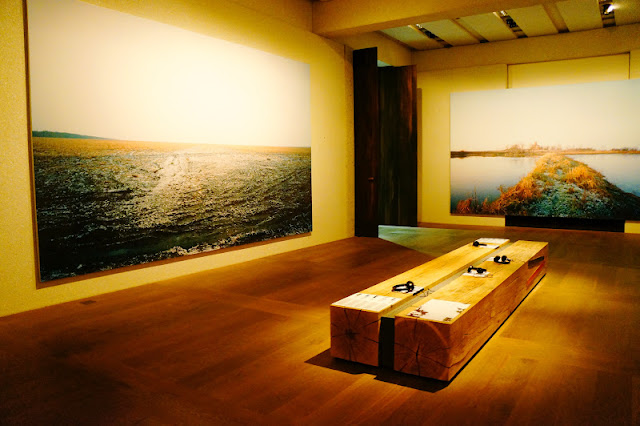 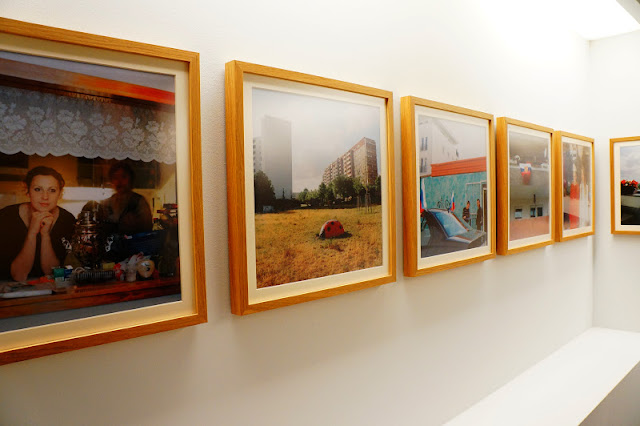 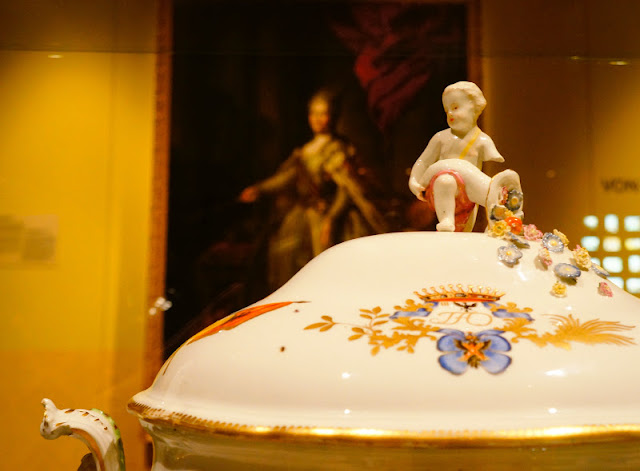 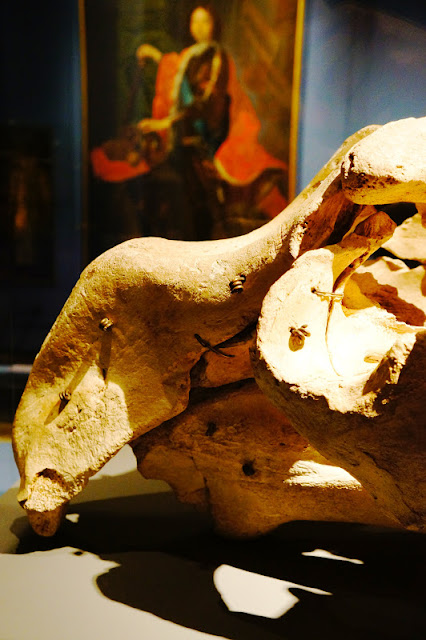 I liked: The photo series on today's Berlin Marzahn, an area where a lot of Russian immigrants live.
I disliked: The fact that it is not an exhibiton about Russians and Germans but about Russian and German souvereigns. 'Normal' people hardly ever appear, if so, almost only during the section on the 20th/21st century.  The fact that some dull modern photography installation presents the second world war. Was it too difficult to find appropriate objects? Is it still too controversial a topic and only art makes it possible to deal with it?

Favorite object: The skull of the Steller-manatee which was a huge and peaceful animal living in the baltic sea until it was hunted by men and extinguished.

What about the exhibition design? Well, diplomatically put: it's getting better from room to room. The archiceture of the Neues Museum on the other hand is fabulous.

Fun fact: Did you know Peter the Great wanted everybody in Saint Petersburg to dress "Western"? He was so serious about it, that he put up figurines with the proper apparel at the entrances to town so that everybody coming to Saint Petersburg would know how to dress.

Parental advisory: Not necessarily an exhibition for children.

Overall rate: Njoaaaa. Which means: I was not really convinced. But then I generally prefer small exhibitions, not those that want to teach you 1000 years of history and already have you worn out after 200 years...

The exhibition in one sentence: An exhibition made up of objects from the collection of the Museum Pankow, telling the history of one of Berlin's quarters through the biographies of things like bunk beds from a second world war bunker, restaurant cups, shop signs and everything else that could possibly tell us something about the turbulent past of Pankow. 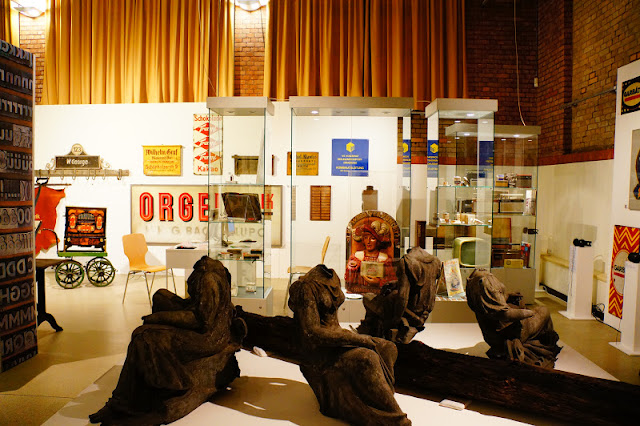 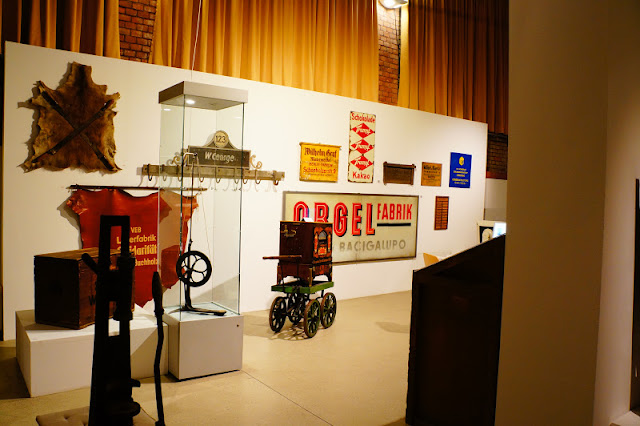 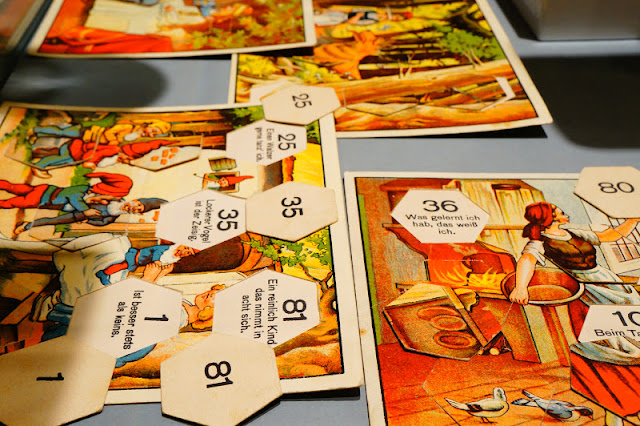 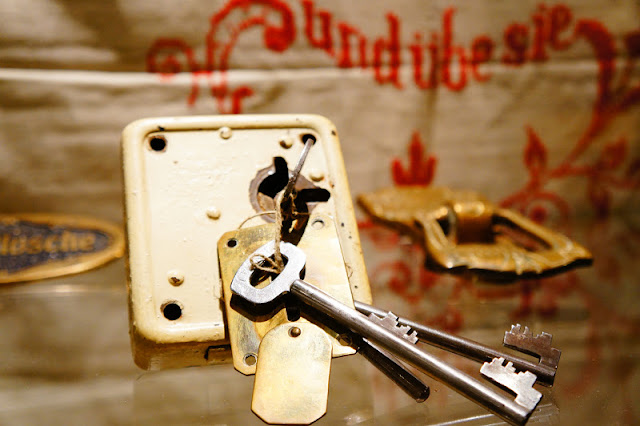 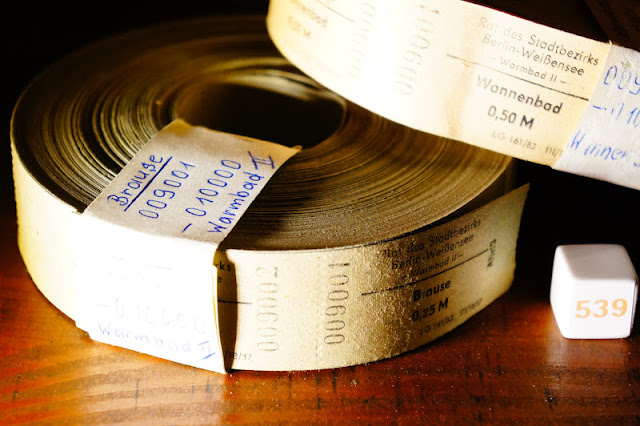 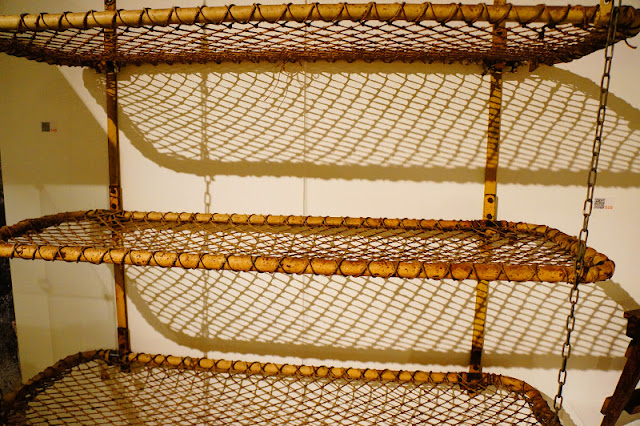 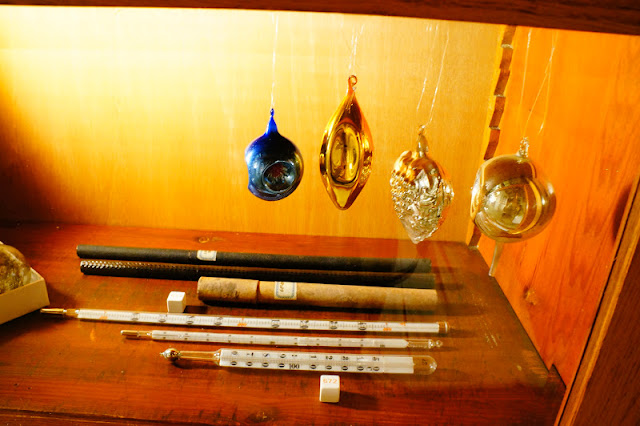 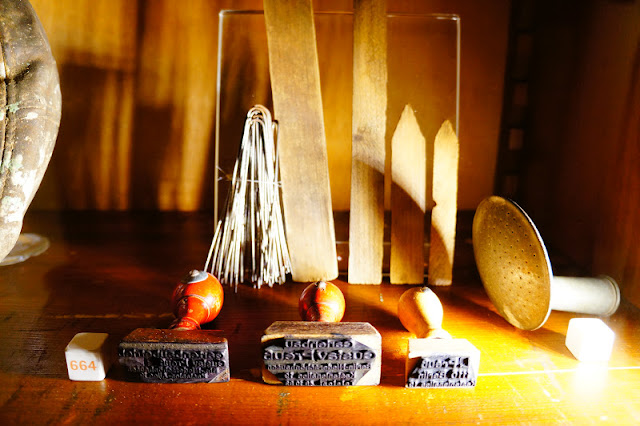 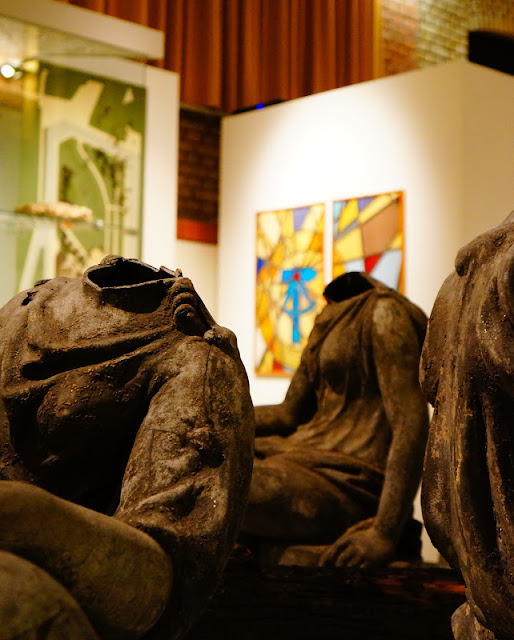 I liked: The diversity. Lots of things to discover and interersting stories to be learned through them. Makes you aware of what used to be in this or that street 100 years ago. So many lives which have been lived in Pankow!

I disliked: The fact that there were no labels, just numbers which you had to write down. You could then type in the number at one of the computers available to find out the story of the object (in German only). Why so complicated?

Favorite object: The tickets for a bubble-bath (5th picture from below)! Did you know that there were still public bathing houses in Berlin in the 1980s? Apparently most apartments in the old east did not have a bathroom yet, so people had to go there instead to have a shower!

What about the exhibition design? Well, it's a small communal museum, what can you expect.

Fun fact: Very much like the exhibtion of the Museum Neukölln...

Parental advisory: Lots to discover, no text: passes the children-test.

Overall rate: A nice, little exhibiton, especially for people living in Pankow and interested in the history of their Kiez and also for those who are a fan of the anthropological notion of the social biography of things. I count myself belonging to both categories.

Link to the exhibiton
Link to the digital database, unfortunately only available in German
Eingestellt von j. um 09:36 Keine Kommentare:

Search my blog for special interests

Other Blogs on Museums and Exhibitions